While i am not really excited right now to write much on any of the platforms because all the kid's fight that is happening lately, there is something i am following very close, mostly because this could be a first indication on what might happen in the future, and that is how each asset is performing on the actual situation.

While the prices on the markets are mostly speculative, and a lot of what is happening there right now is mostly related to hype (good or bad), i think it is a good measure of how the fork is being seen by the markets.

Everyone is mostly aware that right now, HIVE is being seen as more valuable by the markets, but how much is this value?

You can see it here: 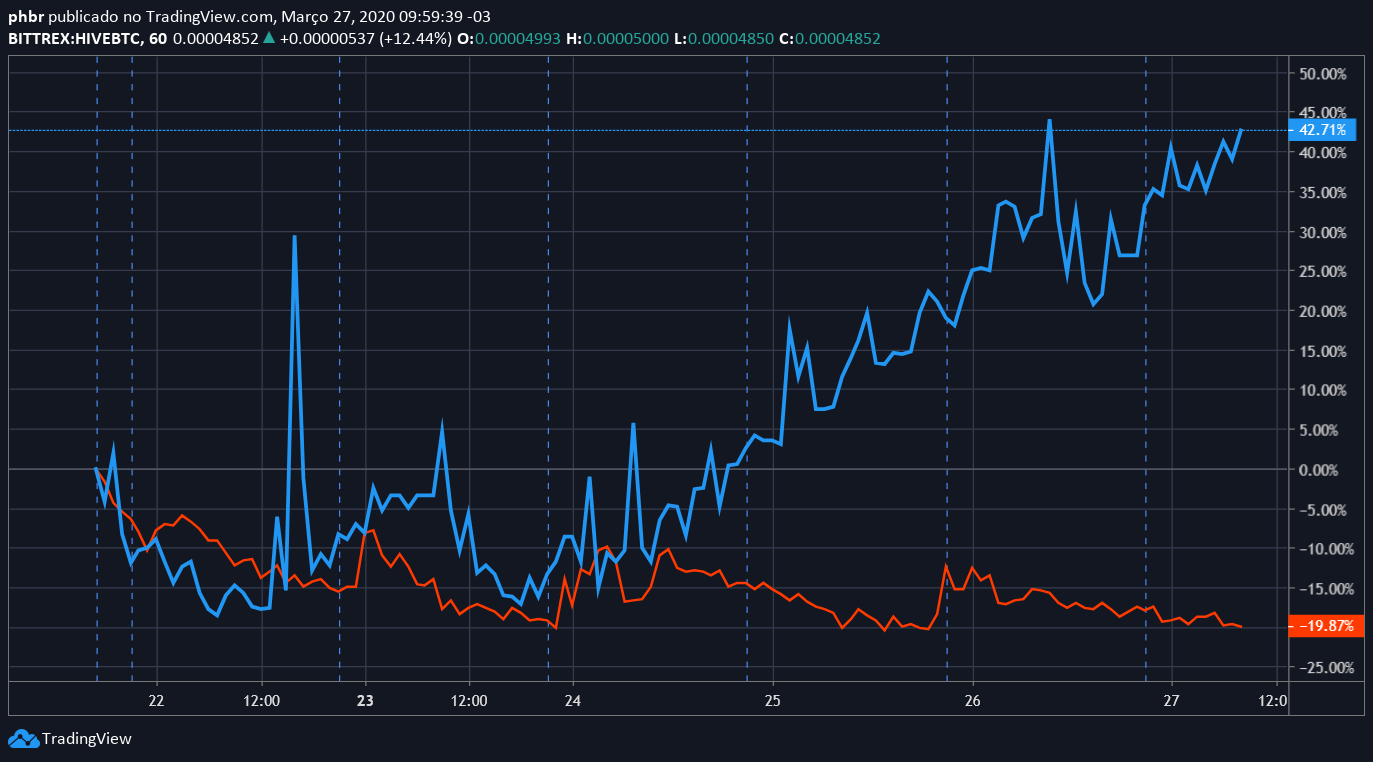 Since HIVE were listed on BITTREX,

So, in theory, the markets are thinking that HIVE is 62,58% more valuable than STEEM.

But keep in mind, that this can be a reflection of a lot of people trading their STEEM for HIVE, and this valuation can be short-termed.

Now, here is an interesting case: 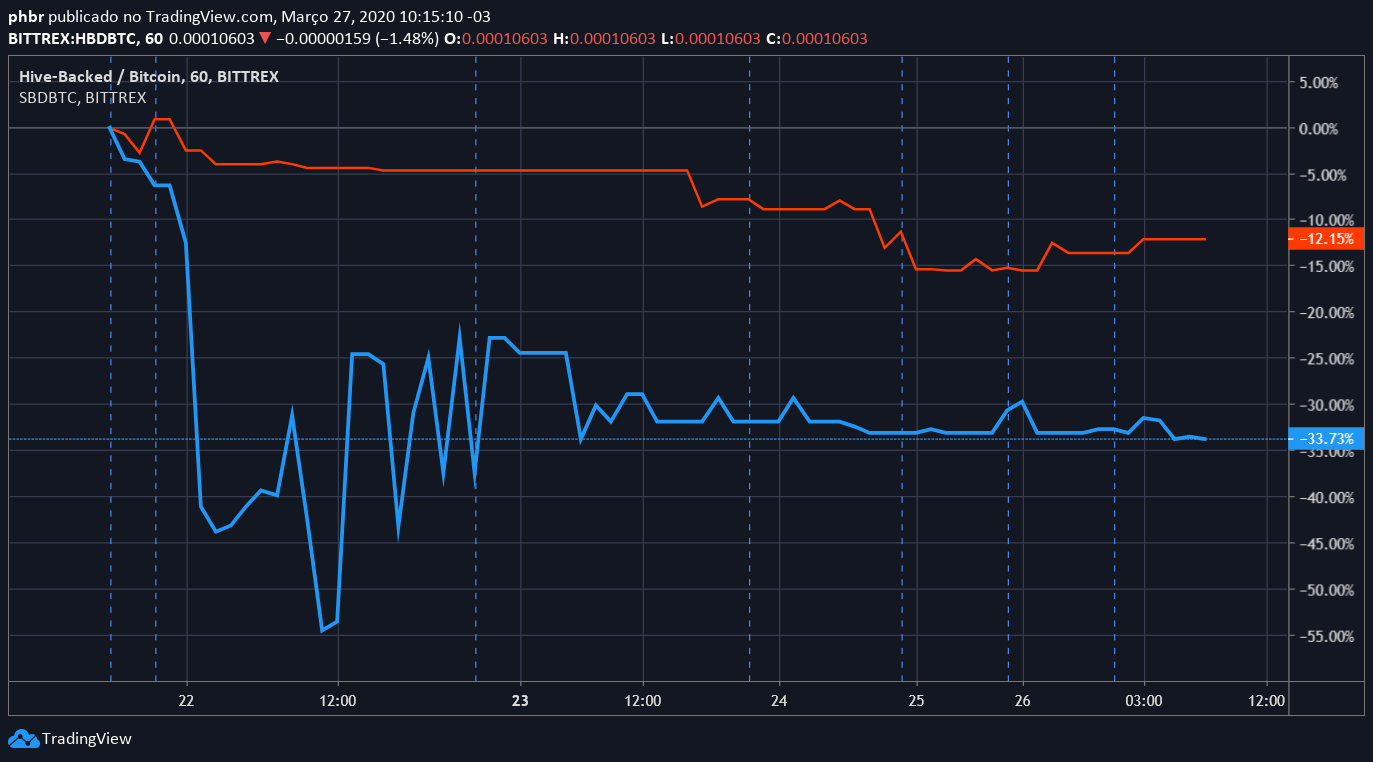 Both chains have their backed dollars down, but HBD is down +- 20% more than SBD

But while this might make SBD looks like a better deal than HBD, we have to remember what is the porpuse of the token backed dollar: Be as close as 1 USD and as possible.

As a side effect, a better criteria to compare these two tokens would be how stable (less volatile) each of them is. So let's take a look at SBDUSD and HBDUSD prices (Red = SBD and Blue = HBD): 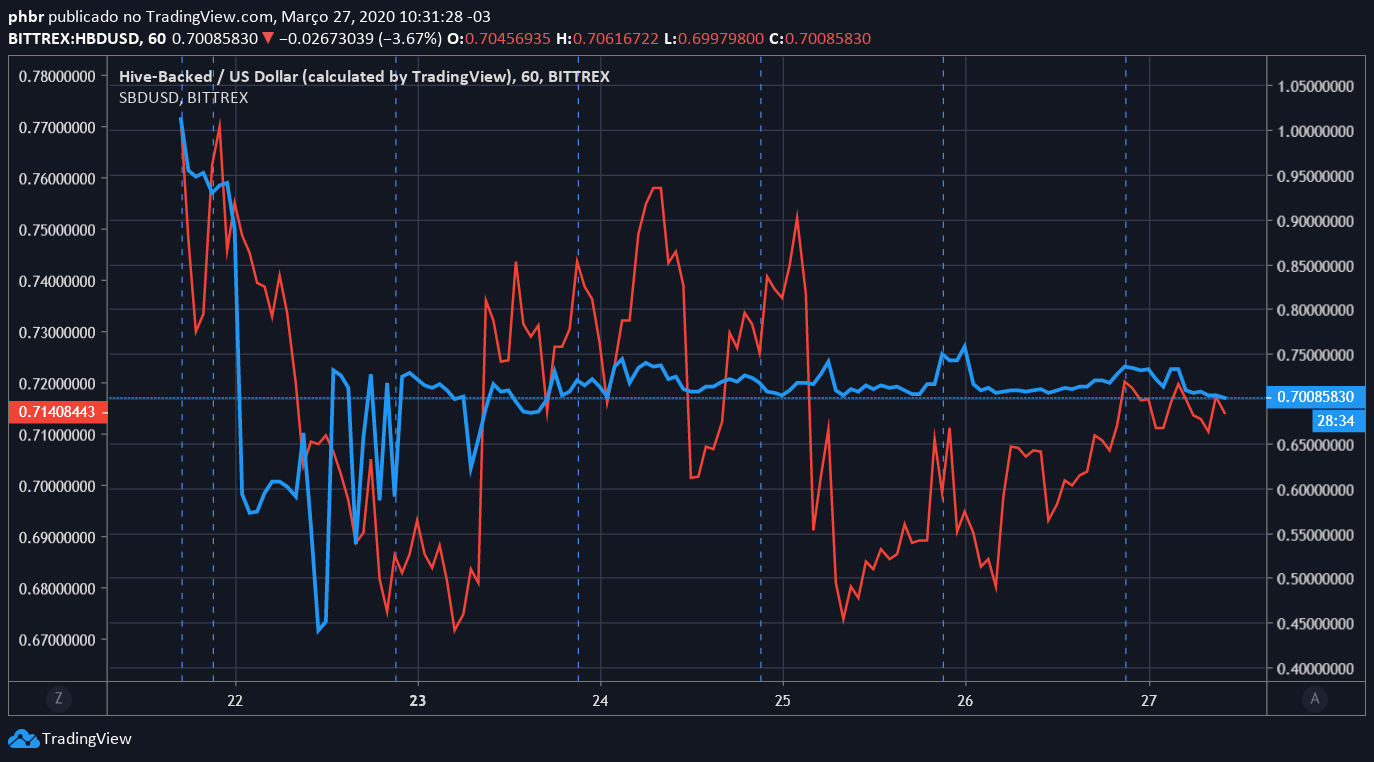 Looks like HIVE is also performing better here. Besides the big drop that happened at the beginning of the listing on HBD, a few days later, HBD reached a way more stable and less volatile movement range.

Remember that the point of having a Token backed dollar is to reduce risk, and the more volatile an asset is, the bigger the risk (and the possible reward though).

Anyway, that is the situation we are at right now, and it will be really interesting to follow what will happen to the price, and how they will evolve, depending on what direction each platform will go.

There is a lot to happen in the next days, and will try to follow it and try to mark when major changes happen on both blockchains to try to see how they are affecting the price.

While some might argue that the price doesn't mean anything, i would like to say that the price of an asset is a reflection of how much that asset is valued by the markets, and how much people are willing to pay.

And in STEEM and HIVE cases, buying more tokens means having more influence on the platform, therefore it's kind of logical to conclude that the higher the price, more people are willing to pay more to have this influence.

And that say a lot about both platforms.